Established in January 2002, PubAffairs is the premier network and leading resource for the public affairs, government relations, policy and communications industry.

The PubAffairs network numbers over 4,000 members and is free to join. PubAffairs operates a general e-Newsletter, as well as a number of other specific group e-Newsletters which are also available to join by completing our registration form.

How can businesses effectively inform and add value to the EU policy-making processes? How did lobbying evolve in the last decades? And how does one lobby in “the Brussels way”? These, and many more questions, were addressed in Whitehouse Communications’ webinar on “The dos and don’ts of business lobbying in the EU”. 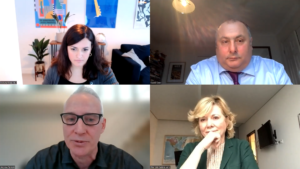 Looking at the evolution of EU lobbying in the last decades, Dr Coen explained that a “positive resource dependency” developed between lobbyists and policymakers, and that nowadays, “Governments and fonctionnaires need interest groups to provide information for the policy-making process.”

Yet, the EU is a very distinct organisation, whose decision-making structures are complex, often making it hard for stakeholders to effectively inform policy outcomes.

So, what does successful lobbying look like? Dr Coen’s main recommendations to have an effective lobbying strategy and get your message across include ”using all channels of influence: the European and the national path, as well as the direct and indirect channel. To be effective, you need to make sure that your voice flows from all directions.”

Dr Coen also emphasised the importance of what he calls lobbying “the Brussels way”, explaining that “Professionalism, trust and reputation are the key components of successful business lobbying.”

The discussions continued with MEP Pilar del Castillo Vera sharing her experiences of good and bad lobbying styles from the European Parliament perspective, and emphasised the key role lobbyists play in the policy-making process: “Lobbyists can provide knowledge and insights on the impact of existing and future legislation – this is essential in any political system.”

But what makes lobbying effective in the eyes of those who draft policy? In MEP del Castillo Vera’s expert view: “Credibility and trust are key – the most efficient lobbyists are those that have a reputation for ensuring quality work. It is also important to build sophisticated coalitions with other stakeholders – putting resources together is a valuable instrument of efficient lobbyists. Sectoral alliances, or collaboration between private companies, NGOs and civil society organisations, are also a powerful tool”.

This holds true especially for UK companies that wish to leave their mark on EU legislation post-Brexit. As MEP del Castillo Vera said: “After Brexit, it is even more important for UK companies to reinforce their lobbying efforts as they will no longer have the support of a government inside the institutional decision-making process”.

Dr Andy Tarrant rounded off the discussions by adding his perspective as a business advisor to the debate. He agreed with MEP del Castillo Vera that while the policy-making process was technocratic, requiring the mastering of detail, this did not mean it was not political. He added that policy-makers were faced with competing technical arguments which also reflected the interests of the parties putting them forward and that policy-makers themselves were not just technocrats either. The Council and Parliament were political actors and would tend to be attracted to technical arguments that provided support for competing institutional approaches; the Council tending to prefer technical solutions that pointed to decision-making being conducted at the national level and the Parliament tending to prefer technical solutions that required implementation by supranational institutions over which it has greater oversight.

The Q&A sessions saw a thought-provoking debate on the different styles to lobbying and the impact of the pandemic on lobbying approaches. Regarding the impact of COVID-19 on lobbying, Dr Andy Tarrant noted: “For NGOs, the pandemic led to a democratisation of lobbying. Online meetings have allowed NGOs to get better access to the Commission and share their input – something that has often been difficult in the past due to the smaller budgets they have relative to corporates which makes it more difficult for them to attend as many physical meetings. In a way, the pandemic has created a more level playing field”. From the European Parliament perspective, MEP del Castillo Vera added that due to the virtual format of meetings, human interaction and informal exchanges with stakeholders decreased significantly and this made it more difficult to build coalitions, gather information and capture nuances. However, she also thought there had been an impressive technological adaptation and that the greater inclusiveness this had fostered has to be maintained when the pandemic subsides.

Regarding lobbying approaches, Dr Coen and MEP del Castillo Vera agreed that, while cultural and personal differences may impact lobbying styles, all lobbyists need to follow Brussel’s distinct style of lobbying to be successful.

In conclusion, the key dos and don’ts according to the experts are:

The recording of the webinar will be available soon, so watch this space.